TORONTO — August 30, 2018: Toronto mayoral candidate Jennifer Keesmaat set out her Network Transit Plan today, and invited Torontonians to compare it to John Tory’s “SmartTrack” plan, which has been rejected by transit experts and will never be built.

“I worked as Toronto’s City Planner for five years”, Keesmaat said. “Toronto has an amazing team of transit experts. It was a privilege to work with them. And if there is one thing I learned from the experience of leading them, it is that we have to stop being distracted by election stunts and mirages like John Tory’s failed signature transit plan. Instead, we need to deliver an integrated, long-term network plan that weaves together subways, LRTs, streetcars, and buses to shorten people’s commutes and ensure there is great transit in every neighbourhood in the city.”

Keesmaat set out her plan for an integrated, long-term Network Transit Plan. It spells out key priorities to fill out Toronto’s public transit system, and to deliver shorter commute times to every neighbourhood. Her priorities include:

Keesmaat noted that taking a network-based approach to transit planning stands in stark contrast to John Tory’s failed signature transit plan as he pitched it to voters in the last election.

“John Tory got elected by promising ‘SmartTrack’ as the solution to all our transit problems. As mayor, he focused on trying to get this plan approved. Almost nothing has come of it. It will never be built. But it’s his plan, and I invite Torontonians to compare his plan — which amounts to adding a handful of GO stations paid for by the City to the existing GO system — to the city-wide network planning approach I’ve outlined today.” 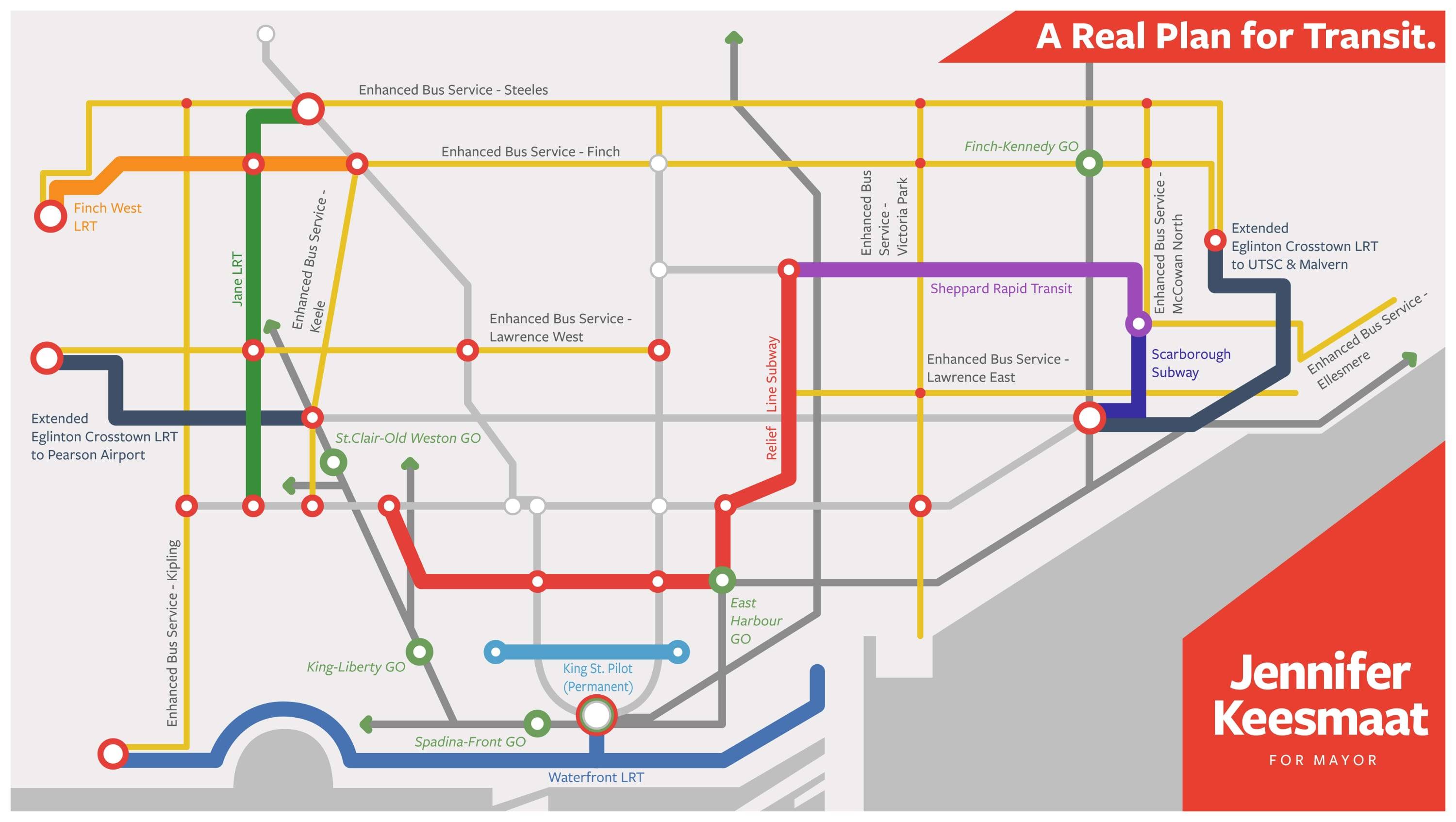 The provincial government has committed to providing $14 billion for transit expansion in Toronto, including the Yonge Street Extension, which is to be built predominantly outside of Toronto’s boundaries and therefore is not included in Jennifer Keesmaat’s network plan. City’s costs and funding contributions will be determined through the design-build phases of the individual projects in collaboration with the City’s federal and provincial counterparts.

[6] http://smarttrack.to/wp-content/uploads/2018/04/SmartTrack-Station-Cost-Validation-Memo_04.11.18-AODA-Version.pdf Note: cost adjusted to reflect reduction of one station.

[8] Estimate based on costs of similar enhancements in other jurisdictions.